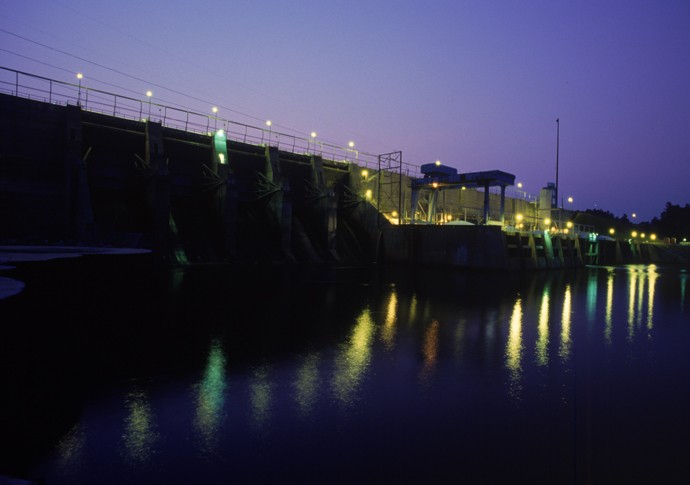 The Wallace Dam Project occupies approximately 39 miles of the Oconee River. The dam and the powerhouse are located in Hancock and Putnam counties. The project reservoir, Lake Oconee, lies in Putnam, Hancock, Morgan, and Greene counties. Lake Oconee covers 19,000 acres and has 374 miles of shoreline.

1963-1970
Georgia Power files a preliminary permit for the Laurens Shoals Project, a pumped storage hydroelectric project on the Oconee River. A preliminary permit order is issued in 1965 with FERC issuing an amending order for the Laurens Shoals Project in 1970. A month later, Georgia Power accepts the amended license. The project's name is changed to the Wallace Dam Project.

1971
Construction on the Wallace Dam begins.

1979
The reservoir known as Lake Oconee starts filling in January 1979 and reaches an elevation of 434 feet.

1979-1980
Unit 6, the first pump turbine unit of the project, is declared to be in commercial operation in December 1979. By July 1980, all six units, including four pump turbine units are up and running.

1981
Georgia Power and the Georgia Department of Natural Resources enter into an agreement to develop geese and waterfowl habitats, which remain today.

2015
Georgia Power will begin the relicensing of the Wallace Dam Project by filing a Notice of Intent to FERC in early 2015.

During the relicensing process, numerous studies will be conducted to support licensing requirements. These include reviews of geology and soils, water resources, fish, wildlife and botanical resources, and cultural resources. The formal license application will be filed in 2018.

The current license for Wallace Dam expires on June 1, 2020. In 2015, Georgia Power will begin the process of relicensing this hydropower plant by using the Federal Energy Regulatory Commission's Integrated Licensing Process (ILP). The license application will be filed in May of 2018. The meetings schedule provides an opportunity for Georgia Power to engage stakeholders and the general public.

View a full version of the schedule