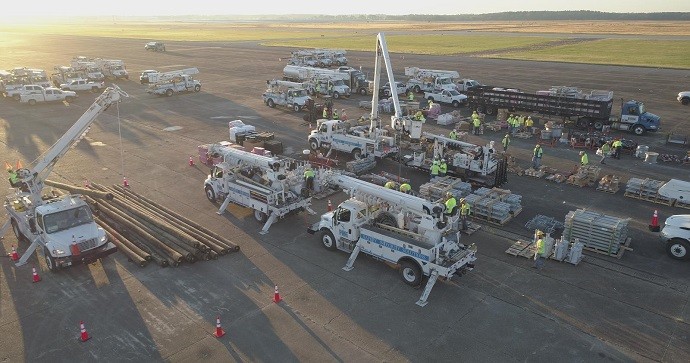 The Emergency Recovery Award is given to select EEI member companies to recognize their efforts to restore power to customers after service disruptions caused by severe weather conditions or other natural events. The winners are chosen by a panel of judges following an international nomination process. Georgia Power received the award during EEI’s Winter Board and Chief Executives Meeting.

“We are honored to receive EEI’s Emergency Recovery Award recognizing Georgia Power’s dedication to serving our customers. Hurricane Michael was so powerful that some of our communities, especially those in the hardest hit areas of Southwest Georgia, are still feeling its effects,” said Paul Bowers, chairman, president and CEO of Georgia Power. “Thousands of men and women from Georgia Power and assisting utilities worked around the clock and amid tremendous damage to restore power to nearly all impacted customers only four days after the storm swept through the state.”

Georgia Power continuously monitored the path of Hurricane Michael prior to the Category 4 storm entering Georgia. The historic hurricane crossed through the state leaving 422,000 service outages in Georgia Power’s territory, with the hardest hit areas in Southwest Georgia. Hurricane Michael was the third-strongest hurricane to make landfall in the U.S. in modern recorded history.

“The dedication of Georgia Power’s crews to restore service throughout Georgia after Hurricane Michael illustrates our industry’s commitment to customers,” said EEI President Tom Kuhn. “Georgia Power’s crews worked tirelessly in hazardous conditions to quickly and safely restore power. They are truly deserving of this award.”

More than 5,800 personnel were mobilized as part of the company’s restoration effort, including support from other Southern Company operating companies and more than a dozen assisting utilities. Responding personnel dedicated over 315,000 hours to the restoration, and service was safely restored to nearly all impacted customers four days after the storm.

Georgia Power has earned the Emergency Recovery Award seven times since the award’s inception in 1998.