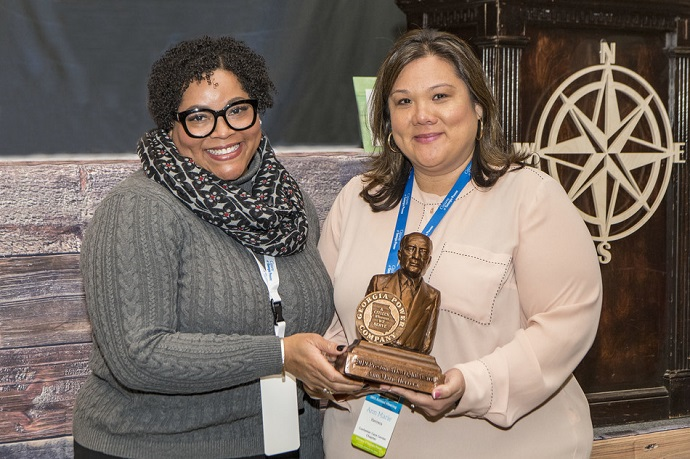 The company created the award to spotlight and recognize the exceptional commitment to service demonstrated by thousands of employees working every day in communities across the state. Angela Gillis, an IT security analyst with the company was also selected as a runner up for the award during a special ceremony held at the annual Citizens of Georgia Power statewide meeting on Saturday. The Citizens of Georgia Power is the company's statewide, employee-driven community service organization.

"Enriching our neighborhoods and improving the lives of those around us is a passion shared by all Georgia Power employees – not just today, but since the very beginning of our company," said Paul Bowers, chairman, president and CEO of Georgia Power. "As our employees continue to fulfill our purpose to be a citizen wherever we serve, I am proud of Ann Marie and Angela's dedication to their communities and recognize the impact they have made for so many."

Herrera has worked for Georgia Power for more than 18 years and has served her community for more than two decades. As the former president of the Citizens of Georgia Power – Jefferson Street chapter in Atlanta, Herrera led projects to feed the homeless population in the city and works with special needs students at Our World School in McDonough. She currently serves on the school's board as well as the Board of Directors for Leadership Henry and Georgia Power's Club of Hearts.

For more than 130 years, Georgia Power has been dedicated to giving back to Georgia communities. Last year alone, nearly 6,000 Georgia Power employees and retirees donated their time to help their neighbors and improve the quality of life in their communities by completing more than 147,000 volunteer hours.

To learn more about Georgia Power's commitment to communities across the state, visit www.GeorgiaPower.com/Community. To keep up with Georgia Power's active volunteer and giving efforts every day, follow the company on Twitter @GeorgiaPower and #GaPowerfulService and #WeHelpBecauseItsHome.