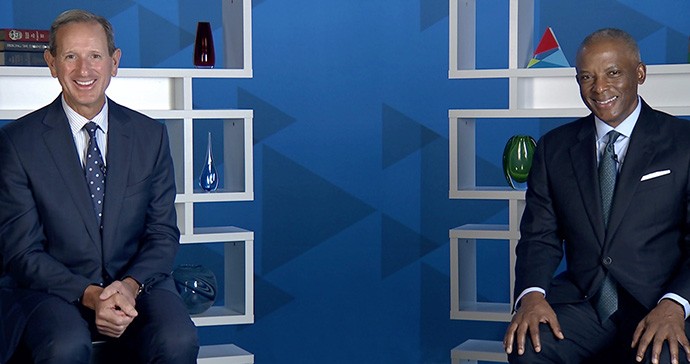 Paul Bowers joined Southern Company in 1979 at Gulf Power and has served as Georgia Power's chairman, president & CEO for the past 11 years.

"For more than a decade, Paul has led Georgia Power to be the premier energy company it is today. From industry-leading storm response and customer satisfaction, to the growth of a diverse fuel portfolio and a deep commitment to the communities we serve, he has positioned the company for continued success," said Tom Fanning, chairman, president and CEO of Southern Company. "We knew it would take a remarkable leader to follow after him and we're confident Chris is that leader. He is a pillar of the community and his depth of experience in the energy industry, generation, public policy, governmental and regulatory affairs, and the state will be incredibly valuable as the company works to continue providing clean, safe, reliable and affordable energy for millions of Georgians. More importantly, Chris leads with a passion for people. The company, its employees and its customers are in good hands."

"It has been the honor of my life to serve alongside the men and women of Georgia Power. Each day, I have been reminded of their dedication to our customers, our communities and our state both in how they serve our customers and what they do for our communities," said Paul Bowers, chairman, president and CEO of Georgia Power. "I'm also extremely proud of the accomplishments the Georgia Power team has made, but most importantly the commitment to building a clean energy future for our state. Their dedication to bringing Vogtle 3 & 4 online to meet the energy needs for the next 60 to 80 years is now within sight. Seeing their incredible progress and having the confidence that Unit 3 will be online to meet our regulatory commitment assures me that it's the right time for us to start the transition to my retirement and leave the company in Chris' capable hands."

When Womack assumes his new role in November, he will lead Georgia Power in serving its 2.6 million customers across the state. He will be responsible for the company's customer service, economic development, generation, transmission, distribution, energy efficiency, charitable giving and volunteerism efforts. He'll also lead the company in storm response, environmental efforts and more.

"It's an exciting time to be back at Georgia Power, especially when we're poised to make history with the first new nuclear units in the U.S. in decades," said Chris Womack, executive vice president and president of External Affairs for Southern Company. "This company has an incredible legacy of delivering world-class customer service and reliability to Georgians, while also being a leader in the communities it serves. It is an honor to be able to come back and be a part of the wonderful team of people at Georgia Power and help continue their great work."

Serving as executive vice president and president of External Affairs for Southern Company since 2009, Womack has led overall external positioning and branding efforts including the company's public policy strategies and overseen the company's governmental and regulatory affairs, corporate communication initiatives and other external and strategic business engagements.

Womack is a member of the board of directors of Essential Utilities, Inc. He currently chairs the board of the East Lake Foundation, is on the national board of The First Tee and is the incoming chair of the board for the Alliance to Save Energy. Womack has chaired the Atlanta Convention and Visitors Bureau board and the Atlanta Sports Council. He has also chaired the board for Communities in Schools of Georgia and served as a member of the Children's Healthcare of Atlanta board. He has received numerous honors, including the SCLC Leadership Award (1998).

Bowers joined Southern Company in 1979 at Gulf Power and has served as Georgia Power's chairman, president and CEO for the past 11 years. Under his tenue, Georgia Power has been consistently recognized by J.D. Power for excellence in customer service, customer satisfaction and reliability while keeping rates 15% below the national average.

Since joining Southern Company in 2010, Anderson has managed and directed the company's political, policy and regulatory activities. He will continue to manage and be based out of Southern Company's Washington, D.C., office. In his new role, Anderson also assumes responsibility for the company's branding, corporate communications, security policy and other external affairs functions.

"An incredible leader of individuals and teams, Bryan over the past ten years has developed a keen understanding of our business and industry," Fanning added. "He understands the importance of building consensus in the ever-changing external environment, and he has a proven track record of achieving bipartisan policy solutions that drive growth and prosperity in the communities we are privileged to serve."

Before joining Southern Company, Anderson worked for The Coca-Cola Company as vice president of government relations and public affairs. During that time, he served as that company's primary liaison to the federal government and oversaw the planning, budget development and administration for its government relations function. Prior to joining The Coca-Cola Company, Anderson served in the law offices of Sumner & Hewes in Atlanta and O'Connor & Hannan in Washington.

A native of Georgia, Anderson earned a bachelor of business administration with a concentration in finance from the University of Georgia and a juris doctor from the Walter F. George School of Law at Mercer University in Macon, Ga.

As the coronavirus continues to spread, Georgia Power wants to assure our customers that we have comprehensive plans in place to continue our operations.