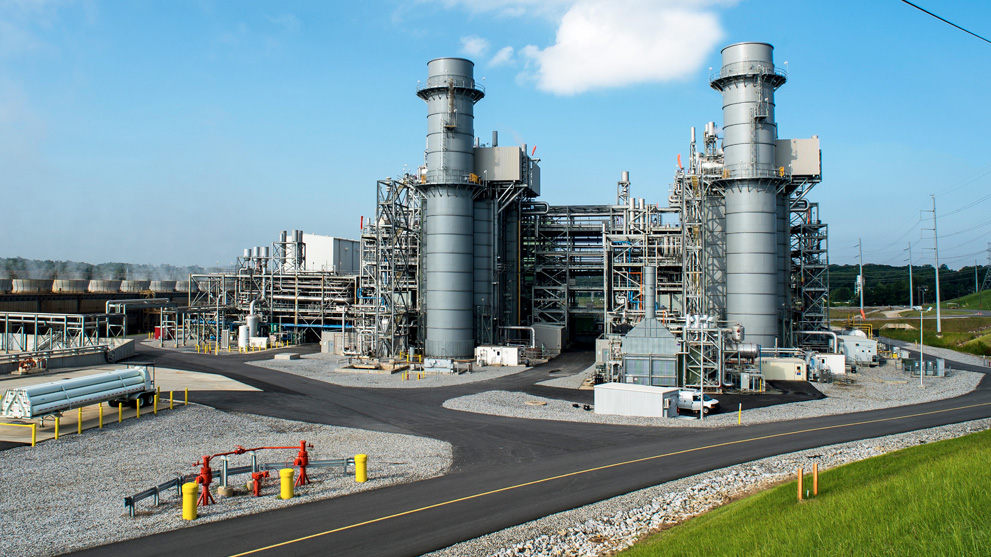 Natural gas is first removed from wells drilled into the ground. It is then treated to remove any impurities before pipelines transport the natural gas to power plants. Most often, power plants create electricity from natural gas by burning the gas in a boiler to produce steam; the steam is then used by a steam turbine to generate electricity.

From Coal to Natural Gas

Plant McDonough-Atkinson represents a major commitment by Georgia Power to ensure an adequate supply of electricity is available to meet the electricity needs in metro Atlanta and north Georgia. Plant McDonough-Atkinson is named for the late John J. "Jack" McDonough – who was Georgia Power's president from 1957 to 1963 and for Henry M. Atkinson, one of the founders of Georgia Railway and Electric Company. Georgia Power retired its coal-fired units at Plant McDonough-Atkinson in 2011 and added three natural gas combined cycle units. These units, located on the 358-acre plant site about six miles northwest of Atlanta on the Chattahoochee River, began commercially operation in 2012. The three natural gas units are capable of producing 2,520 megawatts of electricity and, on average, can supply enough energy to power approximately 1.7 million homes.

Want to support solar energy or have renewable goals but live in an area where solar is not an option or prefer not to install solar yourself? Our Simple Solar program may be the right solution for your home or your business.

Georgia Power incorporates strict environmental standards into operating its generating facilities; Plant McDonough-Atkinson is no exception. We are continually working to ensure our generation fleet is balanced and diverse, including advanced coal and natural gas, nuclear and renewables, such as solar and wind. To ensure this balance while protecting our customers and our existing fleet, we are in the midst of a more than $5 billion environmental construction program. Plant McDonough is part of the diversity by providing natural gas-fueled combined cycle power plants that can produce large amounts of electricity at high efficiencies and with low emissions.

How Electricity is Made

We’re partnering with teachers statewide to bring a comprehensive, STEM-focused program about electricity and power to grades K-12. Discover more at the educational Learning Power website.